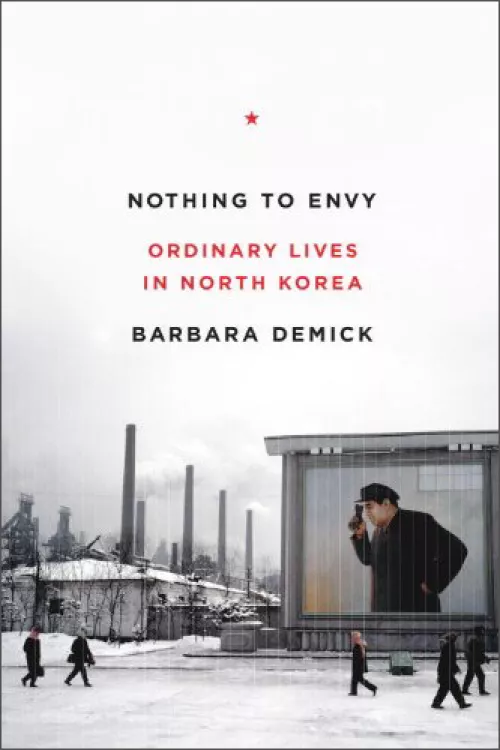 Until her early teens, Mi-ran had no reason not to believe the signs. Her father was a humble mine worker. Her family was poor, but so was everyone they knew. Since all outside publications, films, and broadcasts were banned, Mi-ran assumed that nowhere else in the world were people better off, and that most probably fared far worse. She heard many, many times on the radio and television that South Koreans were miserable under the thumb of the pro-American puppet leader Park Chung-hee and, later, his successor, Chun Doohwan. They learned that China’s diluted brand of communism was less successful than that brought by Kim Il-sung and that millions of Chinese were going hungry. All in all, Mi-ran felt she was quite lucky to have been born in North Korea under the loving care of the fatherly leader.

He walked around the perimeter of the crowd a couple of times to get a better look and debated what to do. He was a scholar, not a fighter. It wouldn’t do to try to push his way back to the box office. Then an idea lodged in his mind. The movie was about to start, and his brother wasn’t there yet. If he sold her the extra movie ticket, she would have to sit next to him since the tickets were for assigned seats. He circled her again, formulating in his mind the exact words he would use to offer her the ticket.In the end, he couldn’t muster the courage to speak to a girl he didn’t know. He slipped into the movie theater. As the screen filled with the image of the movie’s heroine galloping across a snowy field, Jun-sang thought of the opportunity he had let pass. The actress played a fierce resistance fighter who wore her hair tomboy-short and rode her horse across the Manchurian steppe, proclaiming revolutionary slogans. Jun-sang couldn’t stop thinking of the girl outside the theater. When the credits rolled at the end of the movie, he shed outside to look for her, but she was gone.

The North Koreans were methodical to a fault. Each person was put through eight background checks. Your songbun, as the rating was called, took into account the backgrounds of your parents, grandparents, and even second cousins. The loyalty surveys were carried out in various phases with inspiring names. “Intensive Guidance by the Central Party” was the first announced phase. The classifications became more refined in subsequent phases, such as the “Understanding People Project,” between 1972 and1974.

People of his rank would be closely watched by their neighbors. North Koreans are organized into what are called the inminban literally, “people’s group”-cooperatives of twenty or so families whose job it is to keep tabs on one another and run the neighborhood.The inminban have an elected leader, usually a middle-aged woman, who reports anything suspicious to higher-ranking authorities. It was almost impossible for a North Korean of low rank to improve his status. Personal files were locked away in local offices of the Ministry for the Protection of State Security and, for extra safekeeping, just in case someone dared to think of tampering with the records, in the mountainous Yanggang province. The only mobility within the class system was downward. Even if you were in the core class reserved for relatives of the ruling family and party cadres-you could get demoted for bad behavior. But once in the hostile class, you remained there for life. Whatever your original stain, it was permanent and immutable. And just like the caste system of old Korea amily status was hereditary. The sins of the father were the sins of the children and the grandchildren

With the first birth, her mother-in-law cooked her a soup with slimy ribbons of seaweed, a traditional Korean recipe to help a new mother recover her iron. The next time her mother-in-law–disappointed by the birth of another girl-threw the seaweed at Mrs. Song to make the soup herself。After the third girl, she stopped speaking to her。
“You’re doomed to have nothing but girls,” she snapped as her parting shot.
Mrs. Song persevered. The fourth child arrived one afternoon when she was home alone in the apartment. She had left work early that day because her belly was hurting, but she hated to be idle, so she began to scrub the floors. A sharp pain surged through her body and she rushed toward the bathroom. A boy, at last. Mrs. Song was redeemed in the eyes of her family. This time her mother-in-law cooked

Other memories of this period were bitter. Kim Ji-eun, who was at the time a recent medical graduate doing her residency, went to the orchards one weekend with her parents, a married sister, the sister’s husband, and two small children. Carrying the whiny toddlers mos of the way, they didn’t get to the orchards until midafternoon. Too many others had come before them. They found one slightly rotter pear on the ground. They took it home and boiled it, then cut it into five parts for the children, the elderly parents, and Kim Ji-eun’ brother-in-law. Ji-eun and her sister didn’t get any.

“Eight boys and nine girls are singing anthems in praise of Kim Il-sung. How many children are singing in total?”“A girl is acting as a messenger to our patriotic troops during the war against the Japanese occupation. She carries messages in a baske containing five apples, but is stopped by a Japanese soldier at a checkpoint. He steals two of her apples. How many are left?""Three soldiers from the Korean People’s Army killed thirty American soldiers. How many American soldiers were killed by each o them if they all killed an equal number of enemy soldiers?"A first-grade reading primer published in 2003 included the following poem, entitled “Where Are We Going?”:
Where have we gone?
We have gone to the forest Where are we going?
We are going over the hills.What are we going to do?
We are going to kill the Japanese soldiers.

It is axiomatic that one death is a tragedy, a thousand is a statistic. So it was for Mi-ran. What she didn’t realize is that her indifference was an acquired survival skill. In order to get through the 1990s alive, one had to suppress any impulse to share food. To avoid going insane, one had to learn to stop caring. In time, Mi-ran would learn how to walk around a dead body on the street without paying much notice. She could pass a five-year-old on the verge of death without feeling obliged to help. If she wasn’t going to share her food with her favorite pupil, she certainly wasn’t going to help a perfect stranger.

He was suddenlv overcome with sadness for himself and for Mi-ran and the unhapDv life in which thev found themselves. He hadn’twished to offend her with the poem. More as a gesture of consolation than anything else, he did something he’d never done before: he leaned over and kissed her.At least it was sort of a kiss. It was little more than a brush of the lips on her cheek that trailed off before reaching the mouth, but it was far more physical intimacy than they’d shared before. They had known each other for thirteen years, dating for the past nine, and had done nothing more than hold hands.

When North Koreans left the country on official business, they had to leave behind spouses and children who were effectively held hostage to assure their return. Defectors had to be able to live with the knowledge that their freedom came at the expense of loved ones who would likely spend the rest of their lives ir a labor camp.That changed in the late 1990s. The famine and the economic changes in China gave North Koreans new motivation to escape. From the border, they could see shiny new cars scooting along the wharf by the Tumen River. They could see with their own eyes that life in China looked good.The same networks that had helped Mi-ran cross the river quickly expanded their operations. They charted new routes across the Tumen, locating the narrowest crossing points and bribing the border guards. If you couldn’t swim, you could pay somebody to carry you across. The numbers of defectors grew exponentially. By 2001, it was estimated that 100,000 North Koreans had sneaked into China, a small percentage of whom eventually defected to South Korea.

During the summer of 1999, about six months after the defecting family members arrived ir South Korea, national security police had arrested both sisters almost simultaneously at home. Mi-ran’s oldest sister, Mi-hee, the family beauty who’d married a military official and who had been so generous about providing food during the famine, and her sister Mi-sool had led blameless lives; they were loyal to their parents, their husbands, and their children, and loyal to Kim Jong-il. They were taker away in the middle of the night-the very same scenario of Mi-ran’s recurring nightmare, except that the children were left behind with the husbands, who were instructed to file for divorce.

Dr. Kim looked down a dirt road that led to farmhouses. Most of them had walls around them with metal gates. She tried one; it turned out to be unlocked. She pushed it open and peered inside. On the ground she saw a small metal bowl with food. She looked closer-i was rice, white rice, mixed with scraps of meat. Dr. Kim couldn’t remember the last time she’d seen a bowl of pure white rice. What was a bowl of rice doing there, just sitting out on the ground? She figured it out just before she heard the dog’s bark.Up until that moment, a part of her had hoped that China would be just as poor as North Korea. She still wanted to believe that her country was the best place in the world. The beliefs she had cherished for a lifetime would be vindicated. But now she couldn’t deny what was staring her plainly in the face: dogs in China ate better than doctors in North Korea.

IN ARICLE II or its constitution, South Korea holds itself out as the rightful government of the entire Korean peninsula, which means that all o its people-including North Koreans-are automatically citizens.